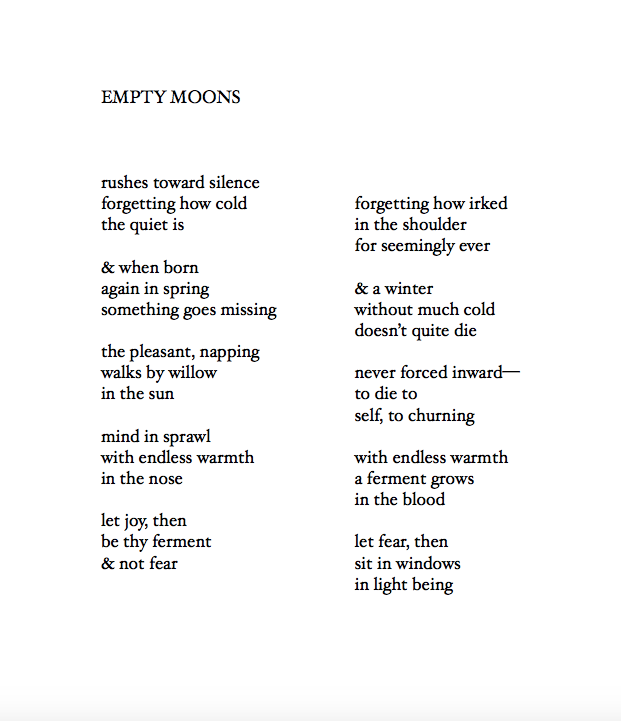 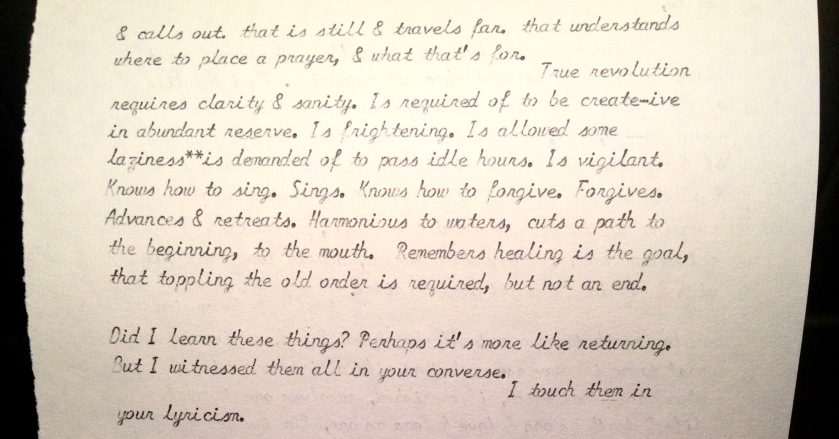 I Love and Fear you deliriously,

Somewhere in some Dharma Art talk, Trungpa says a thing like that one shouldn’t probably name oneself Artist. I remember reading it for Reed Bye’s class & putting a bunch of underlines & circles around it with copious argumentative notes in the margins. What I insisted for a while in discussion afterwards was that Trungpa can say whatever the fuck he wants—but that I had chosen a particular inward path that had led also to a lot of outward path & a lot of that path is a struggle (had I chosen?/ well the path is being walked & the body does so, joyfully or no), that relationships had gone by a brittle wayside, that the games that get you real-paid fall off, that I pour so much of my faith onto those hours of empty-wall-empty-page-roiling-self-emptyself-roiling, & the notion that this is somehow a good thing to do, that it helps this body that is observing this something that is its part of the everything to witness to help in some way the body of outside the body or in or I don’t know but, you know what, I’ve come a long way since believing the voices of those who say “proclaim not thyself an artist,” from youth immemorial until just this morning & will believe them no longer.

Reed tilted his ear, seemed to me like he were just putting his nose down from a fresh twig of jasmine, & said. That makes a lot of sense. I think Trungpa was probably talking to a lot of established people who were at least outwardly fond of their own opinions, for whom the name artist was a social identity & who seemed to him to heap scorn on others they deemed “lesser than.” & used the name of Artist to kind of swing their egos around. I don’t think he would be asking you to deny coming to a sense of yourself through struggle.

I argued a little sideways for a little longer & eventually acquiesced to Reed’s way of suggesting, Sometimes we just listen for a while first & later we discover where we have differences.

‘Surrounded by Artists’ can be a pretty beautiful place, but also forgetful & easy. Boulder was an easy place to wake up inspired, to go out inspired, to go in spired. Those willing to go along with you on some wild hare of imaginative what-not seem to spring up out of the cracks in the sidewalk. If none of your friends are there to say insane shit to you, there’s plenty of strangers that will oblige. It can start to feel normal. Like this is what the planet is like.

But there’s a way among artists of getting isolated from the big old world where nobody’s interested in your long-ass tracks & angsty buddhism. & there’s that way that usually we think of ourselves as outsiders, marginalia, misfits—but when we’re in a club of misfits, where do we go to feed that comfortable feeling of souring in a dark corner, utterly misunderstood. I need that feeling of being alone to be there, because it’s a real thing in the physical law of forces—nothing touches anything. If I can’t feel that, if I’m in a club, I start considering myself pretty much bullshit from lung to tongue.

& if I’m not in the dark sometimes, a lot of the time, how will my songs complete the cycle of yearning, sound sweet, the way I mean them to?

& I can become complacent with my own creative activities. Get to putting flyers up for the club meetings, thinking this is how to make art.

& now here I be sitting in some local coffee whatever by a river in Texas where I like to come & notice how many folks like to sing along with Fleet Foxes also! There’s been some kind of Identity-creep. It’s just happened & I’m not planning to lop it off at the resistances. I like the old warehouse windows here. I like the lighbulbs & high walls & openness & attention to space.

Music seems all about gigs.

Poetry is mostly slam. & there’s some fancy-folk too, who like to speak soft & make their rooms feel important.

I miss the places where poetry wasn’t supposed to be something & just was something together with anybody together there with it. You know, a fun time listening. Fun in exposing the human part of the human to the humans.

I miss that. I mean it fuels me. I remember who my friends are because I’m a little perturbed by the desire so many seem to have to force whatever I’m trying to engage with them into their own preconceptions. If you’re going to ask me a question, & I give you an answer, why does it feel necessary to you (this generic you) to immediately freak out that I didn’t answer on your terms? Sorry I have different parameters. Not sorry, but sorry we can’t see each other right now. I won’t try to correct your question if you’ll agree not to start growling at me like an angry chihuahua when I give you my answer.

Sometimes I guess this is just my ego—why don’t you just immediately get me, or agree with yourself that getting me is up to you, & getting you is up to me?

But it’s also a clear communication to me about the belonging I have felt in the Tape House, with Rumpilots, among the Poets. I know I’m a calm drink of quiet water, but the home I hold to is much as rabble in the street. Forging identity through association. Well… if there can be a JUST applied here, I think I know what you mean, because there is more to identity than association—there is one’s inner work, yes? But even in the house one associates identity through attention to the surfaces of the walls & shelves & countertops & instruments. There are the things lying around because we place them there because we want to see them there & they tell us about ourselves—some story. There are the things lying around because we are always (or regularly) interacting with them: they tell us what direction we’re heading. Sometime’s they embarrass us because they are not the things we hope to always be engaged with. Sometimes they fill us with pride when we take some mental photograph of “this is my room now… you can tell what kind of person I am by my room… & yes I don’t mind this at all.”

I appreciated much your decision in the piece you sent to lay out not the outer-cultivation of a Buddhism, but the work of seeing feeling as it stands & not judging it out of the work. Perhaps the argument-posture towards the “correcting” attitude… well I was going to say something else, but now I’m thinking that you were talking to yourself—that this voice was your own voice telling you what it thought you were “supposed” to be feeling… or how you intend to apply philosophy towards the feeling… as well as anyone who might get in on that process of admonishment with you. I don’t feel certain about the assessment, but it’s a thought. 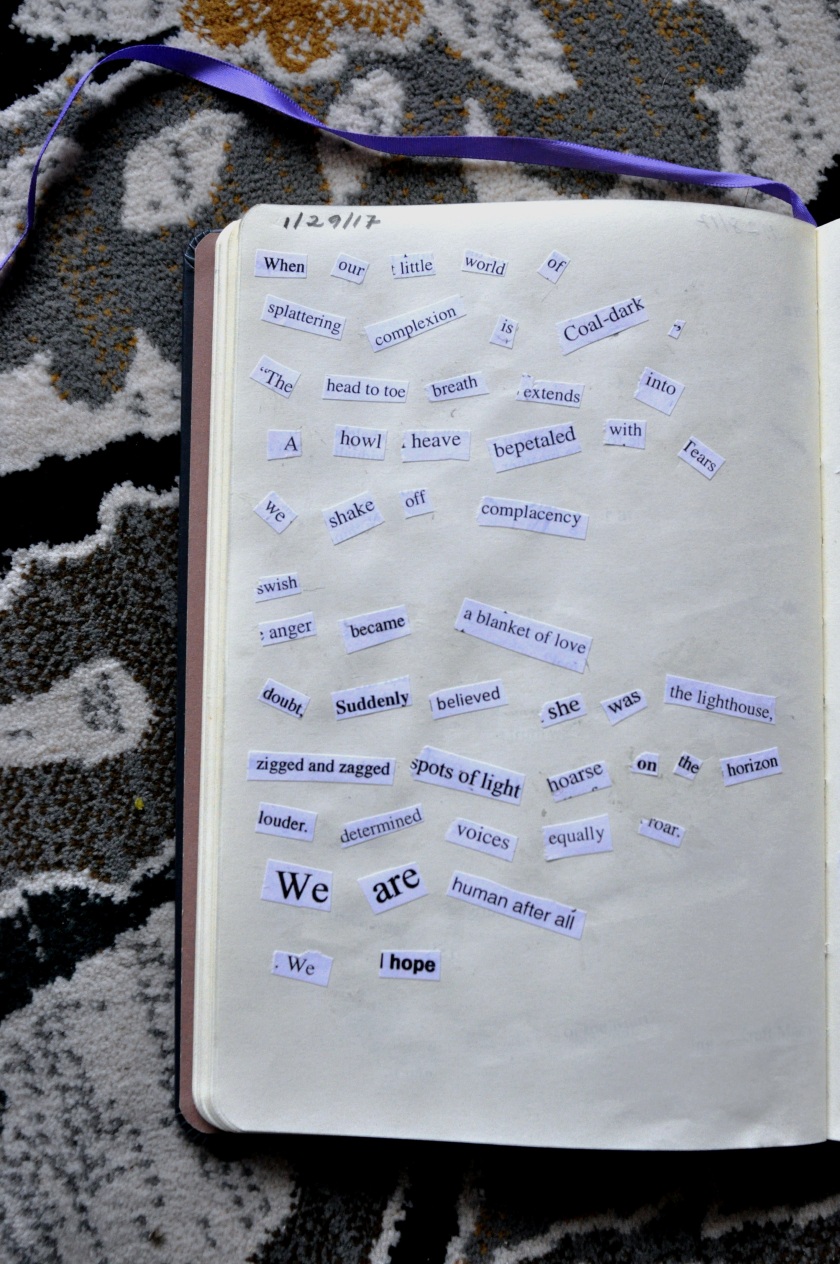 I want to let you know that I’ve settled on a pact with myself to mainly listen & to support those listening & over time (however long or short) will hopefully learn better ways than I currently know for connecting & acting. I understand very well the fingers I see pointing lately/ the voices sternly reminding “marching is not enough.” & have been trying to adhere to a process of “ok” “yes” “continue…” & even though the literature after that  seems largely lacking in specifics (when we say something’s not enough, probably it would be good to follow that up with something, because to those of us who don’t quite know a lot else to do other than write things & walk places & make the occasional phone call, the message of “not enough” can be overwhelmingly convincing & encourage us to feel guilty about walking without a particular “next” in mind. Can start to feel maybe if I don’t know the whole road, I’d better not march.

But I remember in the march I participated in, the route became a kind of uncertain thing at a few points, & I chose at the time to try & watch how we were being directed as best I could, remain aware of the potentiality of dangers, but mostly focused on the fact of this together-movement.

This was enough for me, in that moment, to help create an internal model for how a longer, more figurative walking might look. It was more than just some “euphoria of demonstrating” that gets folks inspired & giddy & “feeling” like they are a part of something when in someone else’s fact (mind) they are just there for show. It’s metaphor in how solidarity works. It’s instructive about the tenor of one’s movement. We can see how each other are treating a moment. How open we are to discussion. How focused we seem on hearing one another. It doesn’t seem like “just a show of support” to me. It seems to beg the question of “next”—it can go some part of the way toward answering that question) your own message did not lack some specific places to look next. & I will look in those places next. & I plan to continue study & solidarity & building of my own sense of how to act.

& I wish I’d come to this moment as prepared as some seem.  I feel I have a sense for empathy that is always needed &  a servant’s heart & a willing set of hands & a strong back. Just… a big cloud of uncertainty as to where those things ought to/can best be put to use.

At least there is the fact of Poets I can wrap my heart around.

Listen it’s not so scary America Death
is coming, free and simple without a vote don’t
even get out of bed. The angels have you it’s
only the end the clown cars in the sky have fallen.
The trumpets have spoken, listen to the music.
Clean as despair, white as flight, have
a tiny flag for your trouble. Forget
your voice, it’s illegal to use it, but don’t keep
it in your pocket either, they can look there.

Come on America it’s only fascism how many
branches of government do you need? There’s apple pie
on the table and Jimmy Stewart having a dream
and you were there and you were there but nobody
from these seven countries. We get our vanilla beans
from Texas, our avocados from California. Chocolate
may go extinct but soon so will democracy small
price to pay to re-legalize cross burnings.
It’s tradition America, what our forefathers
would have wanted. Freedom of decay and a dog
in every Subaru. The King of Mexico can go
back to Africa and Putin can come to dinner
whenever he likes. Why are you crying?

It was a good 200-year experiment but it’s
over now. The revolution will be written behind
closed doors and transmitted to you via state-
approved channels. This is what you asked for
America, 2% lower taxes and crushing violence.

Let’s all shake hands with the National Guard
at the next counter-protest. Color-code
your neighbors and gift them to Homeland Security.
All lives matter America, especially ours.